Does your child know the next School Shooter? 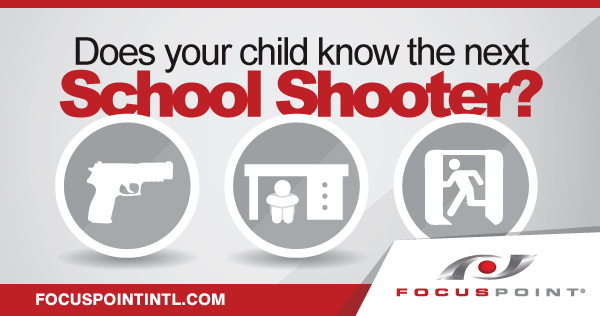 While provocative, this question needs to be discussed. It needs to be asked. It needs to be considered by you and your children daily. The tragic event in Florida on February 14th is just one of many school shootings that have become an epidemic in our country. As a society, we have become desensitized to violence. Sadly, as the investigation into this event unfolds, it is becoming increasingly evident that the shooter had displayed ample behavior and conduct which should have led authorities to this individual long before he had the opportunity to murder 17 innocent students and teachers yesterday.

Yes, I know hindsight is ’20-20′ but let’s get real here. This guy did everything to draw attention to himself except for purchase a billboard. If we look back at other school shooters, there were some indicators that all of us should be aware of.

It’s time to have a frank and open discussion with our children and grandchildren. Let’s face it; teenagers are keen observers of their peers. They can be brutal when they zero in on someone who is ‘different’. I am not talking about picking on other children or being mean to those kids who are not in with the ‘cool kids’. Its about encouraging our children to alert an adult, a teacher or law enforcement when they observe some of the known behaviors of school shooters.

What should they look for?

When I was working as a law enforcement officer, I was bound by the Fourth Amendment – the right to be safe from unreasonable search and seizure. However, my kids knew that the Fourth Amendment did not apply in my house. I was fully aware of most things that my kids were doing in the home, on the computer, and with their friends. Parents need to be aware of what their kids are up to and whom they are doing it with.

There is an old saying, ‘We can’t change what has happened; but we can change what is going to happen’. Sadly, there is nothing anyone can do for the victims of Marjory Stoneman Douglas High School. But we can be on the lookout for the next school shooter. Have this talk with your children and grandchildren today. They might just avert another tragedy.